Q&A with our expert Ronny Guber 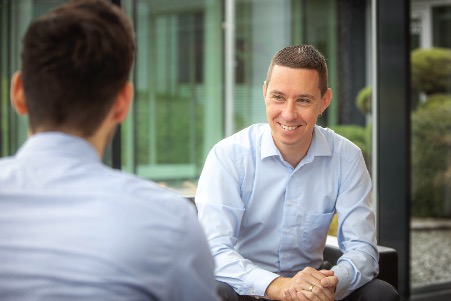 The automotive industry is gearing up for a future dominated by electric vehicles. We sat down with B&R’s electromobility expert, Ronny Guber, to learn about the important role batteries will play in that future, and what automation challenges car manufacturers and their suppliers will need to master in order to come out ahead.

We’re seeing more electric vehicles on the road every day. Is it safe to say the e-mobility trend is going strong?

Ronny Guber: Absolutely. The market share of electric vehicles has continued to grow exponentially, even during the global downturn in overall car sales due to the pandemic. Current forecasts predict that by 2036, electric passenger vehicles will surpass internal combustion engine (ICE) vehicles to make up the majority of new car sales worldwide. 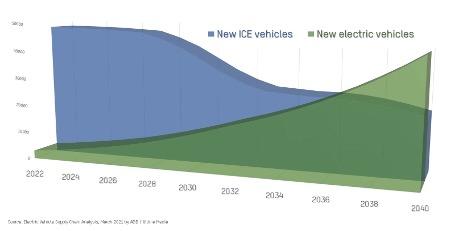 Guber: Consumers are increasingly motivated by sustainability. Many people are ready to make their next car an electric one, and their decision hinges on two main factors: price and range. In other words: How much more do I have to pay for an electric car than a conventional one, and how far can I go before I need to start looking for a charging station. These happen to be two areas where batteries play a decisive role.

Guber: Batteries account for around a third of electric vehicle cost, so producing them efficiently will be crucial to making the price tags more attractive for consumers. And to improve vehicle range, you need to get the latest battery technology to market as quickly as possible, and you need to adhere to manufacturing tolerances and cleanroom conditions that are much more sensitive than for traditional car parts. 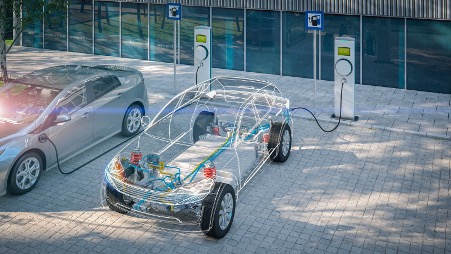 With electric vehicle sales growing exponentially, will battery production be able to keep up?

Guber: That’s the million dollar question. And to a very large degree, the answer will come down to how well those factories are automated. To reach the necessary capacity and cost efficiency, battery producers will need to eliminate stop-and-go traffic between processing stations and achieve cycle times that are orders of magnitude faster than traditional automotive components. The plants will need to be a continuous blur of high-speed productivity – like a battery production superhighway.

And automation technology can make that possible?

Guber: Yes, that will be the central role of automation technology, and intelligent transport systems in particular. These systems allow you to keep the products on the track, so there is no time wasted on unnecessary handling. Production can flow continuously at full speed while processing steps are accomplished in motion. And when you have lightning fast synchronization with other automation components along the track, you can get really dramatic reductions in processing time at each step.

Can you put that in numbers?

Guber: By combining a track system with machine vision, for example, you can identify cells in 50 milliseconds as they pass by at 4 meters per second – with no external triggers, lights or expensive cameras. That would normally take two full seconds with the product stopped, so it’s a time savings of 97.5%. And there are many other steps in battery cell production, such as tape application, where doing them in motion brings time reductions of up to 90% or more.

So, you increase overall productivity by speeding up the individual steps.

Guber: Exactly. Not to mention that you eliminate handoffs between transport systems – which would otherwise take nearly a minute for a set of ten cells. When you add up all those seconds and multiply it by the quantities we’re talking about, it’s an absolute game changer in terms of parts per minute. But the gains are not just in speed, but also in density and availability.

Guber: With an intelligent track system, you can arrange the production flow as a network of interconnected stations. That way, you can coordinate cycle times and have fewer stations with better utilization at each one. You can eliminate buffers and empty stretches of conveyor that take up space without adding value. By parallelizing slower stations, you can multiply productivity without multiplying the footprint. With a networked production flow, parts are rerouted automatically around a faulty station, so small interruptions no longer have such an outsized impact on OEE the way they do with a traditional linear setup.

What does that mean for battery production?

Guber: With numbers like 7 times the output per line, we’re seeing manufacturers replace four conventional lines with one high-speed line – that’s a 75% reduction in floorspace. Or, to put it another way, if you have a factory that’s two or three times as fast, it’s basically like having two or three factories. Ultimately, what that means for battery production is a really outstanding return on investment.

You also mentioned the importance of time to market, can automation technology help there as well?

Guber: Absolutely. Since we’re talking about designing a whole new type of battery production system, it’s especially important to have simulation-based development, testing and virtual commissioning tools. That way, you can compare layouts and forecast throughput long before any hardware is involved. The sooner you know what to expect, the better. Then you can move rapidly from conceptual design to deploying an optimized system without risking expensive delays and redesigns.

Guber: When your goal is to ramp up production as quickly as possible – you need multiple development teams working in tandem. So it’s of course a huge benefit to have a universal engineering environment that supports concurrent development. And if those developers are able to set up basic machine functions with out-of-the-box software components, they’re able to focus their time and energy on implementing the processes that are unique to battery production.

Sounds like the automotive industry has quite an exciting road ahead.

Guber: That’s for sure. And what we’ve talked about so far has mainly focused on the production of individual battery cells. There will be even more opportunities for optimization as cell production moves closer together with the assembly of cells into packs and integration into the car. All signs say that’s the way things are headed, and with B&R’s full portfolio of perfectly integrated automation technology, combined with the robotics and automated guided vehicle expertise from our parent company ABB, we’re ready to start making that future a reality today.

Thanks for your time!

Interview With Our expert Benjamin Troskie from COTES A/S 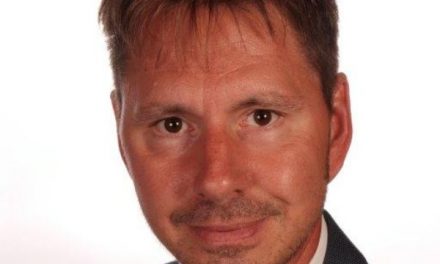 Q&A With our expert Marcus Braun on battery pack manufacturing